After a week of hard work the Southampton HYDRO Team are airborne, foiling with ease during a last-minute test run at the HYDROcontest in Lausanne, Switzerland.  Congratulations should also go to the team for finishing 8th in the long-distance race, despite an unplanned 50-minute pit stop due to interference from other competitors’ remote control equipment.

The HYDROcontest took place from 14th-19th July 2015, and pitted 17 teams from around the world against each other to design, build and pilot the most energy-efficient boat.

Steller Systems are proud to be a team sponsor.  For those interested in the design, the craft will be on display at the forthcoming Southampton Boat Show. 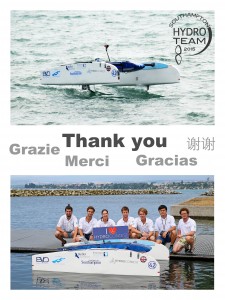